We’re proud to announce that we’ve completed construction on an important project for the town of Scituate: a brand new Public Safety Building which will be home to Scituate’s police and fire departments. This structure will house the personnel, equipment, and resources needed to keep local residents safe while saving the town millions of dollars per year- an increasingly popular model for municipalities across the country. 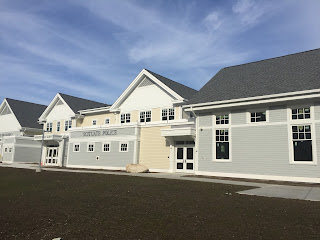 For Scituate, the story of this project begins several years ago, when the town decided it was time to modernize their aging police and fire infrastructure and reduce emergency response times. The contract to build the facility was put up for bid under the Design-Bid-Build model, which we have often promoted as the superior method for commissioning construction projects. CTA Construction was awarded the contract to build the facility and began work on January 4, 2016.

Work progressed very smoothly on the project as a result of strong collaboration between CTA, the project’s architect Dore & Whittier, the owner’s project manager Vertex and town officials. Its completion this week means that we will have finished the facility according to the schedule laid out at the beginning of the process. Much of the credit for the smooth development process and on-time completion goes to CTA Project Manager Jared Dugan and Superintendents on site Brian McCourt and John Dillon, who oversaw this project from beginning to end.

We’re proud to turn over this facility to Scituate’s police and fire services, both of which should have everything they need to do their important jobs well. One feature of note is the Emergency Operations Center (EOC) in the building- a combined “mission control” hub for dispatchers and police and fire officials to jointly manage crises and coordinate response efforts.

The EOC is a great example of why more and more municipalities are turning to Public Safety facilities like this one instead of the traditional model of separate police and fire stations. Combining these services under one roof allows police and fire services, which typically work hand-in-hand anyway, to more closely coordinate their efforts and to respond to emergencies together. From a budgetary perspective, uniting their services under one roof is a big cost-saver for towns, which are constantly on the lookout for ways to utilize tax dollars more efficiently.

Our own experience confirms the reports that these types of facilities are growing more popular. We have noticed more municipalities commissioning the construction of combined public safety buildings, and have been at the forefront of delivering on them for towns across Massachusetts. In fact, we’ve also finished construction on a similar public safety facility in Lunenberg. Expect to see more of these structures in the coming years as towns seek to save money while better coordinating their emergency services.
Posted by Unknown at Wednesday, March 15, 2017